A wine opened my mind 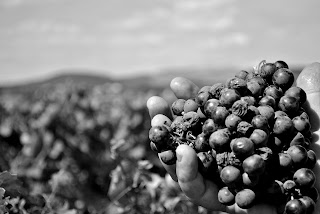 Have you ever had the feeling of travelling with your mind by drinking a glass of red wine?


Yesterday night, I came back in Apulia after a couple of days in Florence, where I have been at Galleria degli Uffizi contemplating Caravaggio, Piero della Fracesca, Botticelli, Tiziano, Giotto, Mantegna et cetera.

It was 11 o'clock pm, we didn't have dinner yet, so I asked Lucia "Would you fancy pasta alio, olio and peperoncino"?

I start cooking, meantime, I open a bottle of Elce Primitivo of Poderi delle Mura, run by Vito Calia and his bride.

The problem you may encounter when drinking such a wine is that you would drink the entire bottle.

Fortunately, Lucia, my wife, calls me from the bed "come to sleep. It's late". So, it came that I drink just half bottle of this fruit juice.

Vito owns a vineyard of just three hectares in Altamura and produce a ruby red Primitivo wine and a White Elce wine (70% Malvasia). 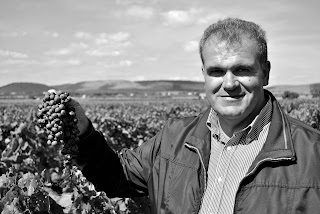 I interviewed Vito a week ago.

I was so curious to know the story behind this wine as it seems that Vito is the only wine maker in Altamura who has decided to promote his wine. Indeed, he's only goal is quality, quality and again quality.

"Ciao Antonio, please, get in" he replies.

We head straight to the Vito's vineyard, located at contrada Parisi, Altamura.

"I inherited this vineyard from my dad who died in 2003. I wine-make since I was a kid. I didn't go on holidays in summer because I had to help my dad to look after the vineyard" he says. 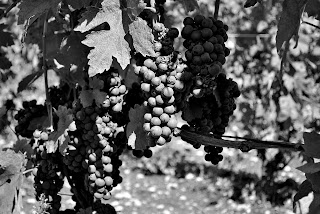 He continues "When I grew up, my main job was as estate agent, which I've carried out for 18 years. Then, in 2013, the crisis arrived. I blessed that crisis because finally my wife and I took the decision to became professional winemaker, focusing just on our wines."

I listen to Vito and I realise how genuine he is.

What probably strikes me more is the passion that his words emanate.

He tells me that this year he has decided to make his wine stronger (15% alcohol instead of the past 14%) by sacrificing some quantity and delaying the harvest at the end of September. 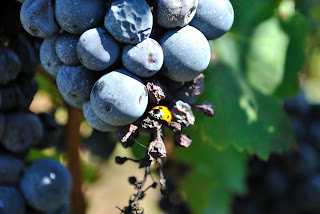 
"Looking after my vineyard means also defend it from diseases such as peronospora (late blight), which may take place especially in May and June. You know, I plant a rose at the head of each row. Roses work like sentinels when peronospora occurs, because they get sick first, so I'd have the time needed to intervene" Vito adds. 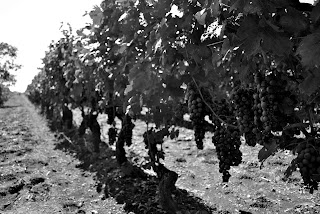 "It's seven years that I don't use anymore copper sulphate (vitriol) because I don't want metal flooding the soil" He says.

I invite you to try his wine.

It won't let you down. Guaranteed. 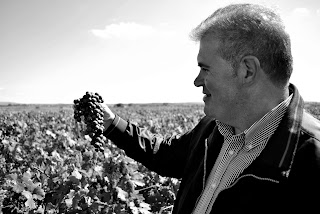 Barletta and his sons 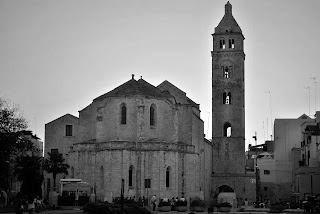 Friday 2 September, I have met in Barletta a good friend of mine, Massimo Lunardelli.


He was invited in Barletta to present his documentary Carlo Cafiero, il figlio del sole as the 1 September occurred the 170s anniversary of Carlo Cafiero's birth.

Cafiero was an anarchist. Born in Barletta, he came from one of the most prominent Apulian families.


To pursue his ideals, Cafiero drove his family to the brink of bankruptcy:  he had subsidised the building of a fantastic villa in Locarno (Switzerland), fronted onto the lake, where Bakunin and other European anarchists convened.

One of the facts unveiled by the Massimo's doc is that Bakunin contributed to drive Cafiero crazy, because of his continuos request of money. Just to make an example, once Bakunin arranged fireworks, again with Cafiero's money, to welcome his own wife.

Finally, Cafiero will be admitted to mental hospital and interdicted by his own family, in order to avoid that he fully squandered the family's assets. 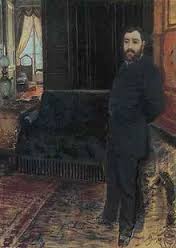 "Would you like to come along with me and visit the De Nittis gallery here in Barletta?" I ask Massimo. 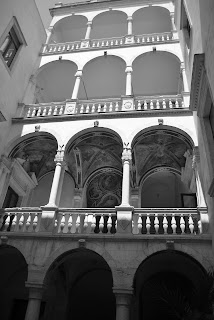 We catch up just outside the Della Motta's building, where the permanent exhibition is hosted.

"In terms of foreign tourists, many French come here. Followed by Germans" The guide admits.

The colours, the light are impressive. 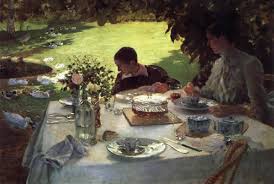 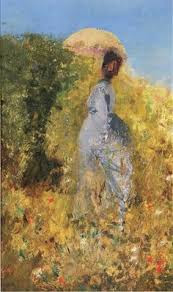 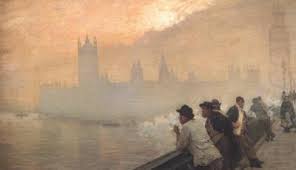 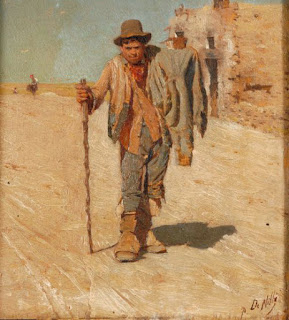 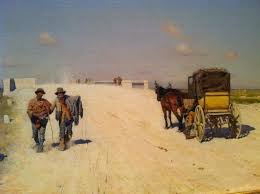 After having seen the exhibition, we get out hunting for some food.

"You know, I'm reading an intriguing book, I Beati Paoli, by Luigi Natoli, published by Sellerio" I address Massimo. 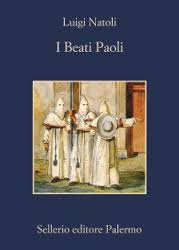 "I Beati Paoli were a secret sect operating in Palermo in 18th century. They meant to defend the poor against the injustices perpetrated by blue-blooded" I continue.

I add "Someone says that mafia roots in such a sect. It may be, nevertheless, the mafia's purposes are gallantless compared to those pursued by Beati Paoli. There is no doubt about it"

It's afternoon. Massimo is tired so he prefers to retire to his B&B and rest for a while.

Lucia and I, head to the magnificent castle of Barletta, where is hosted an exhibition dedicated to Hannibal. 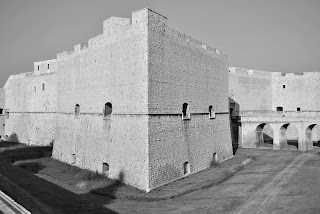 Indeed, nearby Barletta, it occurred the battle of Cannae, fought between Romans and Punics led by Hannibal. It's considered the greatest battle (read carnage) of ancient times.

There is an artefact retrieved around Campobasso (south of Italy) which catches my eye.

It symbolises Tanit, a Punic goddess. 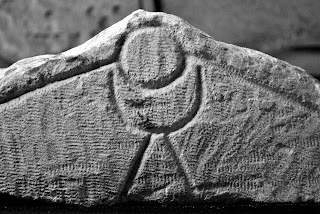 I propose to go to admire the so-called giant of Barletta, a huge statue brought by the sea to the bank between Barletta and Manfredonia. 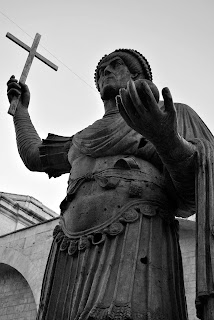 Researchers are still unable to identify whom the statue represents.

Other Massimo friend's join us.

We are at the cappero pub, talking till late.

The plaza is plenty of people, not noisy though.

I say goodbye to Massimo and others "Ciao Massimo. Take care of yourself". 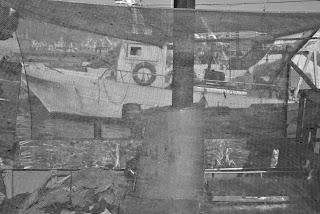 Every year on 1 September, the community of Manfredonia celebrates Saint Andrew, protector of fishermen.

The celebration of Apulian Patron Saints represents more than just a religious event. It's actually a glue which holds the community together.

I have come back to Manfredonia the 31 August to stay with my family.

On 1 September, I take my wife to the Saint Andrew's procession at sea.

We leave my parents' house at 4.30 and go to the harbour.

Hopefully, we will allowed to get on board. 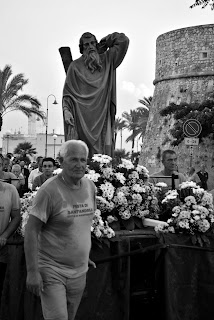 At 5 pm is expected to begin the procession which will carry the Saint Andrew's statue around the gulf of Manfredonia.


Once at the arbour, I see a fishing boat populated by a big family.

"Good afternoon, Sir. May we join you"? I address the captain.

"Yeah sure" he replies.

A lady gets out the boat, takes my wife's hand and lead her on board. 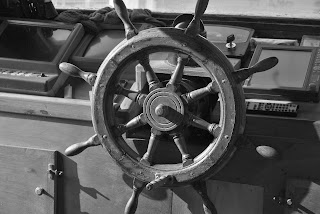 Anyone who wants to join them is benvenuto.

Another family with two children embark.

We all look forward to sail away.

I take chance to ask a couple of questions to Giuseppe, member of the crew and captain's son. 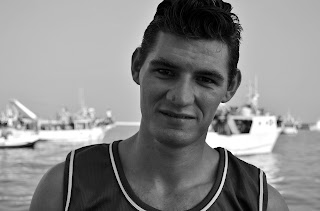 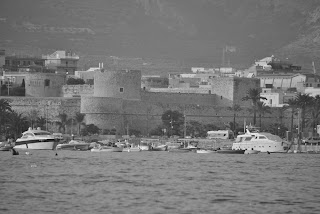 Manfredonia still hosts one of the largest fleet on national scale. Actually, it counts around 250 fishing boats.

Indeed, The European Union is providing funds to all those who dismiss their own boats.

The Mediterranean is deeply suffering the impact of intensive fishing.

Giuseppe continues "We didn't take part to the procession for a couple of years because of the death of my grandpa".

Dozens of boats and motorboats follow the one which carries the Saint. 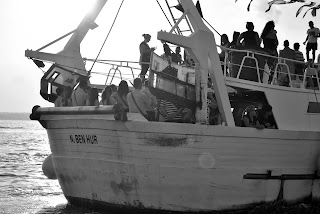 At certain stage, all of them get close at each other and stop.

A wreath is launched from the main boat in memory of those who have lost their life at sea. 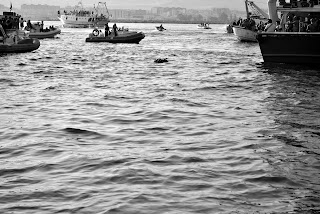 A rolling clapping rises to the sky.

Once back to the port, we get out and leave not before having cheered up the entire crew.

"Call me in case you need anything" Giuseppe says.

I'll definitely call him when I'll need a couple of kilos of fresh fishes.

Lucia and I don't know why, probably because of the kindness of this humble people, or because of the smell of sea, however, we feel our hearth warmed up.

As Jimi Hendrix used to say "experience it".